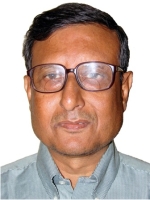 Prof. Dasgupta was the Director of this centre till 2012. Presently he is Vice-Chancellor of Assam University. Before joining here as Director he served in the Geological Survey of India, Jadavpur University, Kolkata and in the Indian Institute of Science Education and Research Kolkata. He has  significant contributions in the field of Petrology and Geochemistry. He has published more than 85 research papers in International peer-reviewed Journals.